I have been a very bad blogger. And I'm going to try and do better, so let's blog!
I finished this last month, and love them. I made a pair in a night last year, and a pair for my mom for Christmas, and these took me a few hours to whip up. So fast!
The pattern is camp out fingerless mitts, and I adore the pattern. So easy, and super fast. No mods.
The yarn is Gina from Plymouth. It's like a non scratchy noro almost. For this pattern, it's a match made in heaven. I usually have a small ball left over, so I could have made them a wee bit longer. Ah well.
On rav here 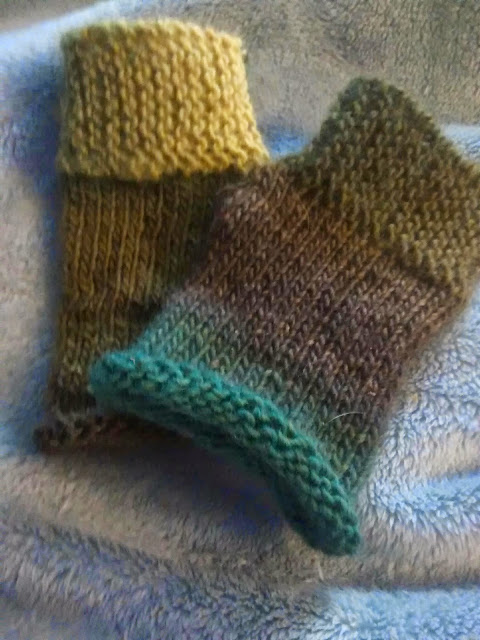 Tour de fleece starts today! Last year, I br one my leg so I couldn't compete. But I have high hopes for this year.
I have rather lofty goals, but it should be fun and challenging.
Wash, card, and spin a fleece.
Finish what's on Ella. I have four ounces and I spun 0.6 before the tour. Its an alpaca/silk/merino blend and it's utterly amazing.
Spin two braids, one sock yarn, one other.
Spin 8 ounces of white Wensleydale. This was my big goal last year, I wanted to make yarn to make snow angel. I need about 850 to make the large.
This year, I have three wheels I can use! Ella and Della, and my mom said I can use her Elizabeth.
I'm excited! Let the spinning commence! 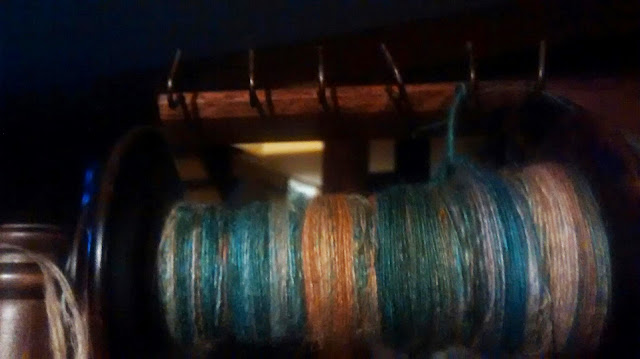 Remember last time, when I said I had a secret?
That secret, was a birthday gift from my parents. A four harness, solid maple, jl hammett loom. Isn't she amazing? 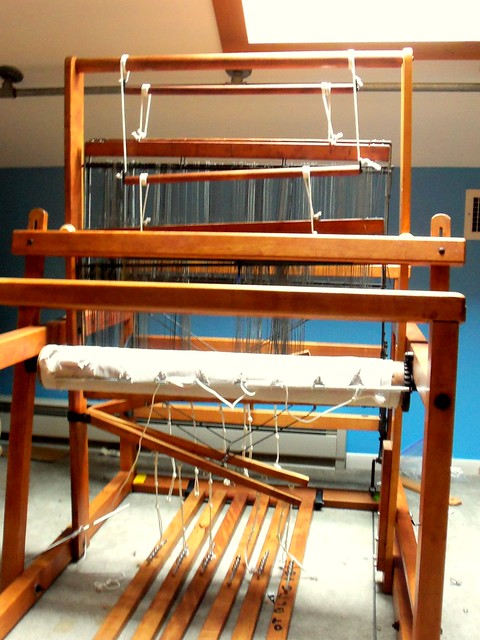 LOOK AT THE SECTIONAL BACK BEAM! 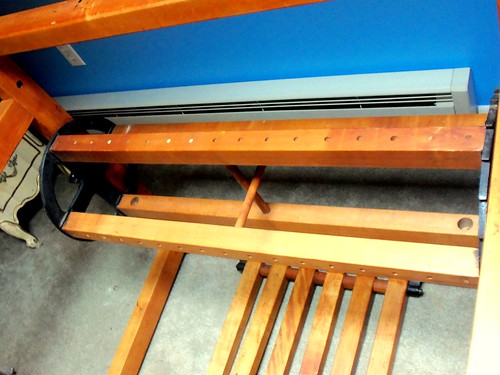 Her name is Minerva, after the goddess of weaving and one of the best characters ever (Minerva Mcgongall from harry potter) 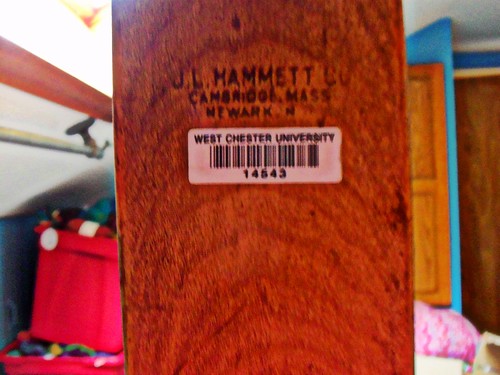 Here you see the bar code from the school she was at, the woman my parents bought her from get her, fixed her up (she was mostly in good shape, one side was busted, so she replaced that with a leclerc piece, but you can't tell) and she's so so lovely.
She lives in my craft room/sitting room/den, and I love her so so so much. 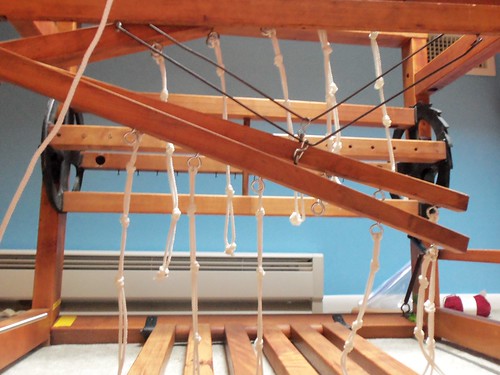 I'm going to start my first project on her soon, a pink and yellow stole/shawl!

This is something that is confusing me, this small hook on the front right side! No idea why it's there. any ideas? 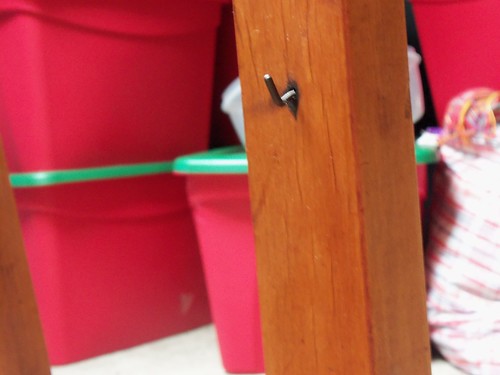 I still have Dad's Christmas scarf on my rigid heddle (Lucy) and the yarn just does not like to be woven. It's super sticky and knots if you look at it the wrong way. I'm determined to finish it this week, because I have another project I want to get started on.
I got a small one ounce bat from Dizzy Sheep, to spin up on my spindle. The colours don't show well, but it's called sunflower and Oh my gosh it's so pretty! 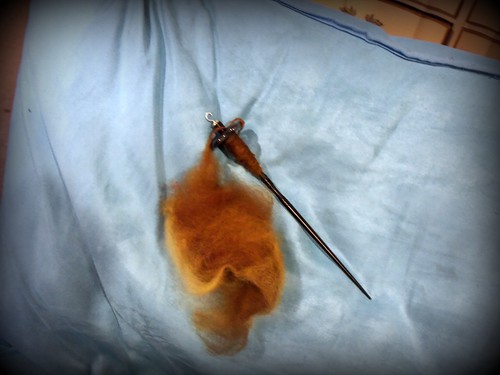 Saturday, my dad and I drove down to Delaware to pick up a wheel, and my birthday present from my parents (more about that after my birthday next week). My mom saw a craigslist ad for some looms and a spinning wheel. I saw the wheel and had to have it.
It's an older louet, she has some minor damage, but it's going to be easy to fix her up, some glue and sanding and a wee bit of elbow grease and she'll be good as new.
This is as we were leaving the house. "We're GOING ON AN ADVENTURE!!!!!" My dad was super thrilled, as you can tell. (and he's wearing a hat I made him for his birthday years ago, knitting win!)

In one morning, I was in pa, maryland, and Delaware. pretty cool, I think!
Here she is, isn't Della so pretty?

My other wheel, is a Kromski sonota named Ella, so now I have two wheels!!! Ella, and Della (after Delaware)

This is the damage, it's nothing major, totally fixable.

It's a really lovely spinner, that's some Brown sheep studio fiber on the bobbin, I'm getting the hang of the wheel. That might become the weft in a small rug I would weave for the wheel, how neat would that be?

Now, are you ready to hear how much I paid for her? Are you sitting down? Are you? ok, $50!!! I know, I can't believe it. The bobbins alone are worth more then that.

Also, my parents surprised me with an early birthday gift, an inkle loom, and a unicorn lucet loom (you can see it on the ottoman behind the bobbin)! This is the night after I got it, it was really fun to use the inkle loom, I already have another project on it, straps to replace ones that got ruined on one of my favorite tote bags, a smallish black one with the entire Nevermore on it.

So yeah, I fell really bad in the weaving rabbit hole. I want to WEAVE ALL THE THINGS now.
Watson says peek a boo!

A scarf/shawl thing, a cowl, and a hat walk into a bar

MORE knitted things! Two of these I knit before I shattered my leg into a million and 6 pieces, but didn't take a photo or block them. First up, a cowl!

This was a mkal cowl, and it was super fun and interesting to make. I love everything about it, the yarn is perfect for spring/fall, it's so pretty, and stripes! I had a blast making this.

I had a sorta kinda plan with the stripes, and on the rav page here, I kept details of much each clue took (but not for the last one, for some reason)

Next up, Thunder and Lightning

When I saw this the day it was published, I needed it. It was interesting, looked different, and my brain just kept shouting NNEEED NEED NEED. I popped off to my local yarn shop, got two skeins of jezebel (really nice yarn, btw) and knit like the wind. I wanted colours like a thunderstorm. For about two weeks before, I was thinking about doing a yellow and blue something, and bam! this pops up

The last bit? the long blue bit? Is a soul sucking bit. It seems to take forever. Which doesn't make sense since the rows are getting shorter. But after wondering if I actually did find a black hole, I finished it.

Blocking was weird, I don't have any lace blocking wires, so I just pinned the whole thing out. I did cut the yarn, instead of carrying it on the long scarf part. No matter what I did, you could see the blue behind the yellow. It meant a lot of ends, but it was better then going crazy trying to carry up the yarn.

And now! A hat! My first finished thing this year.

this skein has been kicking around my to use soon basket of wool for a while, and it was freezing, what with the polar vortex and turning into a ktbsicle, and all, so I whipped this hat out in a few days.
I also churned out three jayne hats, two hats that I designed (pattern coming soon!), and a shawl. And I spun some fiber up!
I took this a week or so ago, it was so pink, I had never seen a sunrise that amazing before. Isn't it so lovely? Taken from my porch

Socks, a slice of summer, and my robotic leg

I'm catching up on taking photos, blocking, and weaving in all the ends on ALL THE THINGS. Well that I made during the bedrest from hell.
I did finish all but ONE gift for christmas, and even made New years day Jayne hats for my family. Which I need to get photos of. But for now, SOCKS!
I started these before the shark broke my leg (That is my story and I'm sticking to it) and I bet my mom I would finish BOTH of them before she finished her half a sock, that she cast on over 4 years ago. I totally won, and now she owes me two skeins of sock yarn.
These are the first pair of stripey socks I made that MATCH! Well, mostly match.

I love them so much. On rav here

now this shawl I knit right after I shattered my leg. My mom bought the yarn the day after I was attacked by the shark, and I started knitting another shawl, wasn't happy with it, and frogged it, and cast on for this. It was perfect.

No mods, the pattern was amazing. i was able to knit it while in pain (tylenol three for a serious shattered leg is not enough), and somehow didn't mess up. I am already planning on making another one.

Last week, I saw my doctor, got some xrays taken, and look! you can see all my screws, the plate, and the place where the screw was removed. I have about 10 more months, yes, ten, of recovery, since when I shatter something, I shatter it goood.

Drink ALL THE RUM

It's 2 am as I write this, which means I have two days to finish all my Christmas knitting. I've gotten a decent amount done, just have a sock, mittens, and a scarf to weave (stop laughing, srsly, stop laughing, let me be delusional). not to mention all the cookies and bread to bake, some cleaning, wrapping of presents, watching love actually a million and eight times, and washing and blocking and weaving in the ends of the knitted items.
So what am I doing? Looking at patterns on ravelry. Of course.
This is a rather accurate thing of how I feel right now